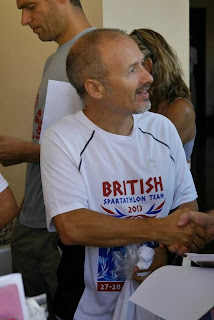 OK, I admit it; I am on a crusade. This is the year that I reach 50 years old, the magic half century of life and the psychological turning point for the vast majority of the population into a decadent decay period which is characterised by long years of poor health, one that ultimately leads to a premature, unpleasant death; that is if they haven’t turned before.

My work is with young people; I am a teacher and these youngsters look to us adults for inspiration and for guidance on how to conduct their lives. It is an incredibly influential period of their lives and the philosophy that embeds in their heads is essentially that by which they will live the remainder of their lives. But how many times to these youngsters hear the message to eat healthy, do some exercise, not to smoke only to look at the person delivering the message who is overweight, visibly unhealthy and who is clearly not ‘walking the walk’? And then they look around themselves and see a society where all the older people are actually getting old, looking old and suffering from poor health. Such is the extent of the poor health that they grow up thinking that it is indeed normal and that the message they are hearing is just an extravagant lie. All the youngsters see is hypocrisy and they become cynical and reject the message.

So then, what better way to spread the message than to do both Badwater and Spartathlon in the same calendar year that I reach 50. I finished Badwater this summer and that has been written about in another blog post.

In the 4 previous attempts at Spartathlon I had failed twice and finished twice. The score was even and this was the decider. The stakes in my mind were high; all the students at school were really interested in this “old” guy running this insane distance in this ridiculously short time. The news was published on the school website and the pressure of putting in a solid performance; so as to demonstrate beyond any doubt that I practice what I preach to these adolescents was at a maximum. Maybe for people outside the teaching profession this may seem a little strange, indeed, it will seem strange to many of those in the profession too but as I said earlier, I am on a crusade and if I leave a legacy, however small it will be that we can live a healthy and active lifestyle right up to the point that we die. At 50 I am still young! 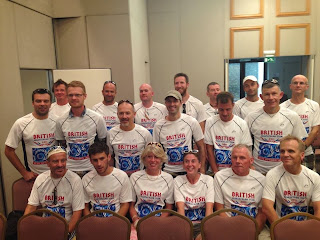 The Spartathlon race feels very familiar now. The arrival at the London Hotel, the pre-race tension, the daft jokes with Rob Pinnington and the general banter with all the other runners is just great fun. I have been playing this game for some time now and this was a time to meet up with many old friends. James Adams and Robbie Britton who I had trained with in Spain just a few weeks ago were buzzing, James as the British Team captain and Robbie, who was determined to “smash it”. Both inspirational guys but I had my focus purely on the finish. I had to beat this beast just one more time. 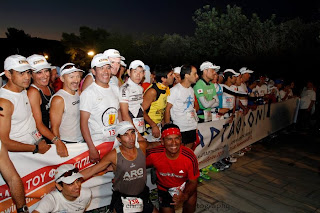 At the start of the race I spent some time talking to the Argentinians. I have written a lot in Spanish and many of these people know me from my writings. I met Gerardo Re in Badwater this summer and we had a lot to talk about. Nico kierdelewicz lives very close by and we had trained a few times together before the race. Like I said, I just love the pre-race tension and the nervous laughter but my laugher wasn’t nervous, it was simply childish joy at being surrounded by like-minded nutcases.

So at 7 in the morning we left the Accropolis and started our journey to Sparti. The race developed well, Rob Pinnington quickly hooked into my pace, using me as a pace setter so that he didn’t go too fast. In this race pacing is everything and starting out too fast is paid for by failure. But after some 5 hours of bad jokes and a lot of laughter Rob fell behind as the heat of the mid day sun started to bite. Then I was on my own for a long time, casually passing others or being passed myself. I came across Paul Ali, I overtook him. Then he overtook me, so I overtook him again ….. and on and off like that until about 20 kms to the finish! Paul is true a warrior, of that much I can attest, and although he was having obvious difficulties with the race he just kept at it until he finished. Respect! 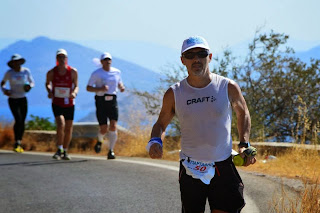 On the other hand I was on a roll and felt just so strong. The kilometres fell away and I simply flowed through those ancient mountains where so many warriors have fallen in the past. The connexion was complete and I was just completely in the zone and running was just so easy. That is until about 150 kms. At this point I was having difficulty with eating and keeping the food down. This isn’t at all unusual as it coincides with the small hours of the morning and my body shuts down. The mountain came and went but I had slowed down quite a lot at this point and the 2 hour margin that I had accumulated started to be lost.

When the sun came up I started to feel a whole lot better but my legs were heavy and I couldn’t recover the pace that I normally do after the night. I was eating again but the legs weren’t responding, they were like planks of wood and it took all my mental effort to move them. They did move, and the moved sufficiently but they didn’t flow. No matter how hard I tried I just couldn’t connect to the beast within and every step was a struggle. But there’s the point. I knew I would finish. There was absolutely no doubt that I would finish. I had a comfortable margin and all I had to do was to hang in and move towards the finish. That’s why the beast stayed hidden, he knew I didn’t need him. 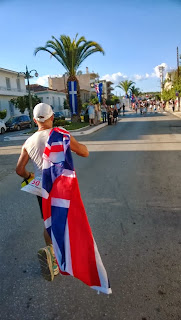 The finish is Sparti eventually arrived and the Union Jack flag was thrust into my hand as I approached the finish line. The tunnel of people leading the way to Leonidas’s statue was lined with the carnage of runners that had failed, including many from the British team. They cheered me on all the same and then I remembered why I was here. Finishing the Spartathlon is always emotional. It takes so much out of you to get here that the ecstasy of touching and kissing leonidas’ foot are simply overwhelming, and of course the crowd goes wild every time someone finishes. The Spartathlon finish is simply the best finish in the world. Woolley 3, Spartathlon 2. Game set and match, and at 50 to boot! 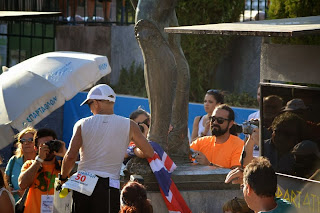 The Spartathlon is the greatest footrace on Earth. This year I actually found Badwater tougher with the 55ºC heat but Spartathlon is still the greatest. Why? Because it just is, that’s why! It is impossible to explain and the only way you will ever know is to take part …. And finish. And that’s the rub. Most don’t. The physical demands on your body are enormous but the mental stress of the race is greater still. The race unleashes ancient demons that haunt the runners right from the very start and that do their very best to derail them. They usually win. It’s the battle with the demons that makes the Spartathlon so difficult and that make the finish so special as it means that you have beaten them in battle.

Many people have asked me what it takes to finish the Spartathlon, now that I have had 3 successive finishes. Well, that’s easy: Be like a Spartan warrior. No retreat, no surrender and be supremely fit. You will either return on your shield or with it. It really is as simple as that and any compromise on that philosophy will result in absolute failure. The only prize in Sparti is the finish.

As far as my crusade is concerned, I hope that I have set a good example to the students at school. I hope that they are starting to see age as a mind set issue rather than how many years you have been on the planet. Remember, you don’t stop running because you get old, you get old because you stop running.
Posted by Mark at 05:47